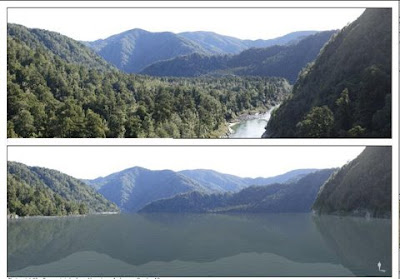 Mokihinui dam before and after - thanks Forest and Bird

It's a worry. We seem to have a range of plans for dams, tunnels and irrigation all coming out or applying for consents at the moment. And all affect Ngai Tahu because they are all on our rivers and concern our water.

Mataura dams - up to 4 dams proposed for Matauta/Clutha River

Mokihinui hydro project - an 85 metre high dam, Fourteen kilometres of gorge will disappear under 80 metres of water; 330 hectares of river bed and forest will be flooded

Fish and Game are complaining about water quality problems in Otago

and in Saturdays press, news that massive irrigation plans threaten the Mackenzie Basin.

Conservation groups say that the plans could transform parched, high country land into a replica of the Canterbury Plains.

Forest and Bird have called it a "water grab". And why do they call it that?

and on the same page in the press we had a story about Solid Energy applying for resource consent for a new dam.

This hydro development is on the Sockton Plateau near Solid Energy's open cast coalmine. The scheme would divert streams through a series of reservoirs, tunnels and power station outfalls.

And this is the kicker - in capturing the tribitaries before they ran into the Ngakawau River, they say they will improve the water quality, which has suffered from mining runoff.

I'm sorry but just how stupid do you think we are. The streams were stuffed by you and now you want to abuse the streams more, with this power scheme, and you are doing it to help clean up the streams! Clean them up anyway you made the mess.

The under sea micro-tunnel would run about 600 meters offshore. 110 hectares will be inundated. So far over 30 submission with 9 opposed.

So I think you would agree there is a lot going on around water.

Do we have the resources within OTRONT to fight these projects and maintain the mauri of these waterways? We have opposed most of these projects. We have had our kaumatua and kaiwhakahaere, our legal team and other OTRONT people all put strong and impassioned Ngai Tahu case's up. But what do we do if they just ignore us?

If we don't fight and stop the degradation of these waterways we might not get another chance. Already the arguement is used, "Well it is already not natural, so it doesn't matter." If we don't fight, if we accept the economic arguements , the jobs arguements what is that saying about us?

I have a few other questions and some answers as well... but I've save them up for later.
Posted by Marty Mars at 9:15 PM