birds of a feather


In a video podcast which sparked outrage, the Bradford MP and notorious polemicist suggested sex without consent should not always be thought of as rape, if a woman has previously consented to what he called "the sex game". He added that Assange was merely guilty of "bad sexual etiquette".

This attitude seems to infect men of a certain age. On The Standard many debates have raged around this issue and posters such as RedLogix, Colonial Viper, Morrissey, vicky32 and others have added their views and they are similar to galloways, and IMO they all support rape culture with their comments and attitudes.

They are no better than Todd Akin and his sicko comments about legitimate rape.


Then on Sunday, he was asked by local news station KTVI-TV about his no-exceptions view on abortion. The 65-year-old lawmaker replied: "It seems to me, from what I understand from doctors, that is really rare.

"If it's a legitimate rape, the female body has ways to try to shut that whole thing down."

Galloway and the assangefanboys are guilty of failing equality 101 - it is very basic stuff but the truth is easily hidden when privilege is being protected.
Posted by Marty Mars at 9:39 AM No comments:

Although I am busy with study I still love physical work and today I helped build a retaining wall. Lots of shovelling - great for the body and soul.

TangataWhenua.com is an awesome site with many great articles and interaction. I just noticed this scorecard and I'm going to copy it here - hopefully everyones cool with that.

It is the United Nations’ International Day of the World’s Indigenous Peoples today - I wasn't aware of that.

The Mana Movement have released a scorecard measuring the New Zealand government’s three-year progress against the United Nations Declaration on the Rights of Indigenous Peoples. 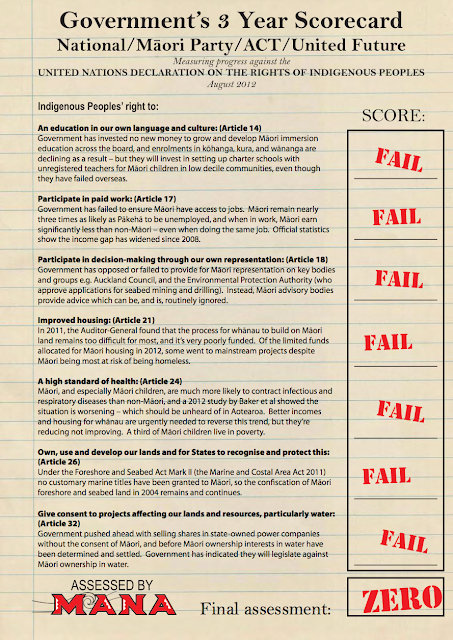 Zero indeed and that's being optimistic.

Metiria Turei, co-leader of the Greens has also issued a statement to the government today. It is a powerful statement that demands action from the key government.


... the Key Government needs to honour its commitments under the Declaration on the Rights of Indigenous Peoples (DRIP) and agree to negotiate with the pan-Maori group on water rights

Maori have agreed to create a single forum to negotiate water rights with the Government. John Key has so far not acknowledged this new pan-Maori group and has stated that the Crown will negotiate with Maori iwi by iwi.

The right of indigenous people "to participate in decision-making in matters which would affect their rights, through representatives chosen by themselves in accordance with their own procedures" is guaranteed in the DRIP. The Key Government endorsed the DRIP in 2010.

"If the international commitments that New Zealand signs up to are to have any meaning, then the Government must honour them at all times, not just when it is convenient," said Mrs Turei.

This is really great to hear. One of the best qualities of The Greens for me is their commitment to tino rangatiratanga.

Posted by Marty Mars at 4:55 PM No comments:

water and a seal

There is a lot on at the moment, I've got 3 assignments due at the end of the week so head down time. It interesting how sometimes we try to make life easier and we end up making it a bit tougher. I thought I'd do a couple of double semester papers to ease the load... and I've managed to end up with a lot more to do this semester, as in 5 papers. Doh!

Perhaps prime minister key is thinking the same as his desire to sell off our assets hits the immovable wall of Māori rights. I am sure he thought he was making life easier for himself and his mates - you know, to make more money. The Waitangi Tribunal have stated, that the government request to hurry up their process of deliberation, is "unusual and inappropriate". Sums it up well.

I came across this photo from a while ago. What a beautiful animal. Popoiangore - The Leopard Seal 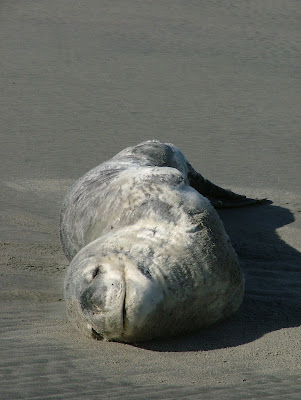 The indigenous Nasa Peoples carried out a peaceful but daring effort to demilitarize their traditional lands in Cacua, Colombia. In one confrontation, the Nasa removed police trenches from an urban center and disassembled homemade FARC missiles found on their lands. Days later, Nasa forcibly removed troops from El Berlin’s mountaintop base. The Nasa were responding to a week of intense battles between Colombia's armed forces and the FARC. It is but the latest in a long list of such encounters in a war that has stricken the Nasa to constant anguish, exploitation and abuse. Despite the effort, Colombia is now preparing to increase its military presence in the region.

Representatives of the Taos Land Trust have officially returned the Ponce de León Hot Springs to the Taos Pueblo Tribe. The sacred site has been used by Taos Pueblo for ceremonial activities since time immemorial. For more than a century, however, the 44-acre area had been in the hands of private landowners. According to a press release, Taos Land Trust, a local land conservation organization, received funding in 1997 to acquire the property from private landowners, to protect it from commercial development. After a 15-year search for the best entity to preserve the land and its natural and cultural resources, the organization has now transferred legal ownership to the Taos Pueblo, returning the site to its original indigenous owners.

The Sarayaku people, after waiting patiently for nine years, have welcomed with open arms a decision by the Inter-American Court of Human Rights. The court has declared that Ecuador is responsible under international law for the violation of Sarayaku's rights to prior consultation, communal property, life, judicial protection, and other important rights. The Sarayaku say they will now closely monitor Ecuador's compliance with the sentence and ensure that indigenous peoples' territories be respected in the face of damaging extractive industries such as oil drilling.

Newly announced plans by China's central government for the "resettlement" of the last remaining nomads have sparked protests in Inner Mongolia, with traditional Mongol herders accusing authorities of the illegal expropriation of grazing lands for development projects. At least four protests by Mongol herders have been reported over the last month.

The regional government of the Altai Republic reviewed and passed a new decree to protect sacred sites from being wrongfully damaged or destroyed. "Essentially, through this decree, the governor of the Altai Republic is instructing local authorities to make laws to protect these sacred sites which are being threatened by the construction of a gas pipeline by the Russia’s natural gas company Gazprom," says Cultural Survival. "The pipeline across the Ukok Plateau has been called a 'moral violence against people,' by Urmat Knyazev, a deputy in the Altai republic’s legislative assembly."

Visit Intercontinetal Cry to read about these issues and many others.

Posted by Marty Mars at 6:46 PM No comments:

Eddie on The Standard has highlighted a very good point about the water debate. Prime Minister key doesn't even have a clue.

As Eddie notes this is the flagship policy for key, this is the one they are pushing through against all opposition and this is the one where key doesn't even know the slightest about the law or Māori rights. Mei Chen calls keys optimism that 'she'll be right',  "misplaced" and that is the mildest thing you could say.

I have posted on The Standard thread that

My big worry is the Maori Party, because key will be applying the instruments of displeasure to them soon and they will not like it. They will fold into the narrative key and his minions have constructed, and before you know it they will have justified it all away. I hope my fears are unrealised.

If that does happen, we will see Māori deliberately pitted against Māori. Keeping on top of the issues and making sure sunlight is liberally applied are the answers. If we know their game, we can defeat them.